The 5 Biggest Technology Trends In 2022

In 2022 the covid-19 pandemic will continue to impact our lives in many ways. This means that we will continue to see an accelerated rate of digitization and virtualization of business and society. However, as we move into a new year, the need for sustainability, ever-increasing data volumes, and increasing compute and network speeds will begin to regain their status as the most important drivers of digital transformation. 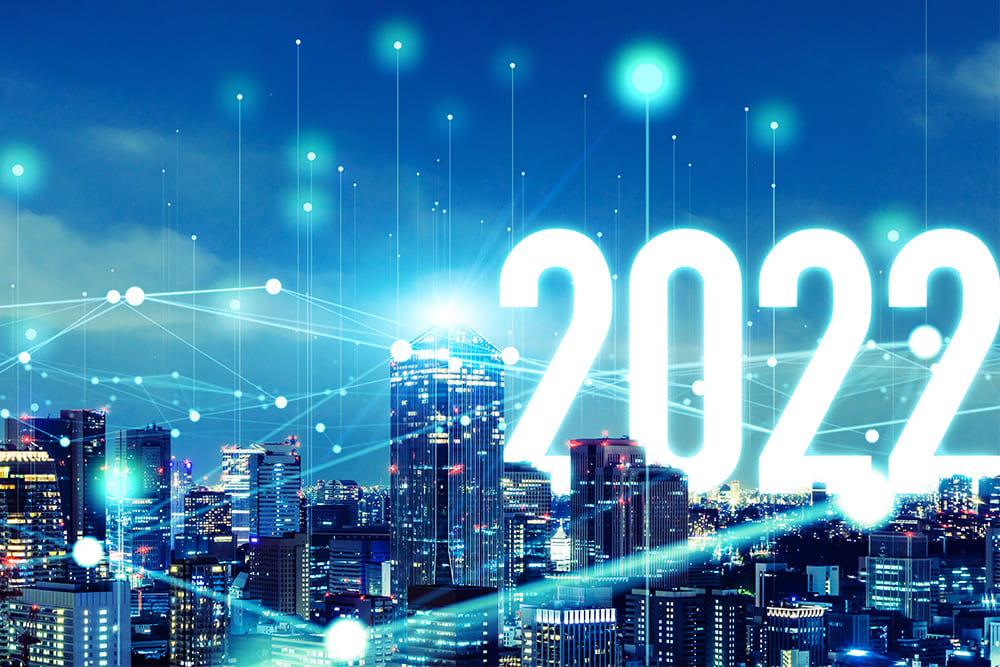 For many individuals and organizations, the most important lesson of the last two years or so has been that truly transformative change isn’t as difficult to implement as might have once been thought, if the motivation is there! As a society, we will undoubtedly continue to harness this newfound openness to flexibility, agility, and innovative thinking, as the focus shifts from merely attempting to survive in a changing world to thriving in it.

With that in mind, here are my predictions for the specific trends that are likely to have the biggest impact in 2022. You won’t find musings on quantum computing, neural interfaces, or nanotechnology – while they are certainly on the cards, their impact will be felt further down the line. Instead, the most important trends in 2022 are likely to focus around the convergence of technology trends, as tools emerge that let us combine them in new and amazing ways.

"Smart" really just used to mean connected – smartphones, smart TVs, and the plethora of other smart devices were really just the same old toys but connected to the internet. Today, “smart” increasingly means powered by artificial intelligence (AI) – generally machine learning algorithms – and capable of helping us in increasingly innovative ways. Smart cars use facial recognition algorithms to detect whether we are paying attention to the road and alert us if we're getting tired. Smartphones use AI algorithms to do everything from maintain call quality to help us take better pictures, and of course, they are packed with apps that use AI to help us do just about anything. Even smart toilets are on their way – capable of helping to diagnose gastrointestinal issues by using computer vision to analyze stool samples!

AI has permeated the tools we use to carry out everyday work – from the ubiquitous voice assistants to language translation and tools that allow us to extract structured data from pictures, whiteboard scribblings, and hand-written notes. It also powers much of the robotic process automation that has enabled workloads to be lightened in admin, logistics, accounting, and HR departments. Whatever your industry or job function, you’re likely to find there’s an AI-powered solution designed to make your life easier.

This broad trend encompasses AI, the internet of things (IoT), and newly emerging super-fast networks like 5G, all of which are coming together to augment us with capabilities we didn’t have just a few years ago. This highlights the fact that on a longer timescale than the one we are specifically looking at here, the most impactful trend of all will be convergence. Growing data volumes, faster network and processor speeds, and the “democratization” of data (more on this below) are coming together and will affect society in a way that is much more than the sum of their parts.

Everything-as-a- service and the no-code revolution

Another increasingly powerful driver will be the ongoing democratization of data and technology. In recent years an entire industry has emerged which aims to put the skills and tools necessary for tech-led innovation in the hands of as large a proportion of society as possible, regardless of their expertise or experience. Cloud solutions for storage, network and processing mean costs, and risks of setting up expensive infrastructure in order to try out new ideas are heavily mitigated. Hybrid solutions – for when public cloud services aren’t entirely appropriate, for example when dealing with very private or valuable data – have matured to the point where a “best of both worlds” solution is often viable.

Innovation has been curtailed in some areas by the skills crisis, which sounds like a problem but has been a driver behind the explosion of self-service and “do-it-yourself” solutions. Not every company needs to hire an army of computer geniuses to build their own "digital brain" when they can simply lease one for the work they need doing. Ready-built AI solutions exist for everything from marketing to HR, project management, and planning and design of production processes. In 2022 we will continue to see companies deploying AI and IoT infrastructure without owning a single server or proprietary piece of cognitive code.

No-code interfaces will become more popular as a lack of programming knowledge, or a detailed understanding of statistics and data structures, will cease to become a barrier to bringing a world-changing idea into reality. OpenAI – a research group founded by Elon Musk and funded by, among others, Microsoft, recently unveiled Codex, a programming model that can generate code from natural, spoken human language. As technology like this matures – which we will start to see in 2022 – and converges with the possibilities offered by cloud infrastructure, our innovation and imagination will less frequently be held back by a lack of either resources or technical skills.

During 2020 and 2021, many of us experienced the virtualization of our offices and workplaces, as remote working arrangements were swiftly put in place. This was just a crisis-driven surge of a much longer-term trend. In 2022, we will become increasingly familiar with the concept of a “metaverse” – persistent digital worlds that exist in parallel with the physical world we live in. Inside these metaverses – such as the one proposed recently by Facebook founder Mark Zuckerberg – we will carry out many of the functions we’re used to doing in the real world, including working, playing, and socializing. As the rate of digitization increases, these metaverses will model and simulate the real world with growing accuracy, allowing us to have more immersive, convincing, and ultimately valuable experiences within the digital realm. While many of us have experienced somewhat immersive virtual realities through headsets, a range of new devices coming to the market will soon greatly improve the experience offering tactile feedback and even smells. Ericsson, which provided VR headsets to employees working from home during the pandemic, and is developing what it calls an “internet of senses," has predicted that by 2030 virtual experiences will be available that will be indistinguishable from reality. That might be looking a little further ahead than we are interested in for this article. But, along with a new Matrix movie, 2022 will undoubtedly take us a step closer to entering the matrix for ourselves.

For technology to work, we humans need to be able to trust it. We already (rightly) see strong pushbacks against many ways that technology is currently being used that are seen as obtrusive, dangerous, or irresponsible. AI, in particular, is sometimes portrayed as a "black box" – meaning we can't see inside it to understand how it works. This is often due to its complexity rather than any malevolent scheme to limit our understanding, however, the effect is the same. This means that incidents where AI is shown to be damaging – for example, when Facebook recently appeared to label images of black people as “primates” – are extremely alarming. This is particularly true in a society that is starting to look towards AI for decision-making that affects lives, such as hiring and firing.

The idea of transparent and explainable AI has been growing in popularity over recent years, as it has become clear that there are segments of society that distrust it – clearly with good reason! Governments, too, clearly understand that there is a need for a regulatory framework, as evidenced by the existence of the EU’s proposed Artificial Intelligence Act. The proposed act prohibits authorities from using AI to create social scoring systems, as well as from using facial recognition tools in public places. There is also a list of potentially dangerous effects, including "exploiting vulnerabilities" and "causing physical or psychological harm," that AI solutions providers will have to demonstrate their systems will not cause, before they can be offered for sale. Some, however, claim that it doesn’t go far enough as, in its current state, it doesn’t contain any stipulation that people should be informed when they become the subjects of AI-driven decision-making processes. Google CEO Sundar Pichai has said that while he recognizes regulation of AI is necessary, “there is a balance to be had” to ensure innovation isn’t stifled. This balancing act is likely to become an increasingly prominent subject of discussion during 2022 as more people become aware of the potential positive and negative effects on society that AI and other technology trends will have.

During the pandemic, renewable energy was the only form of energy that saw usage increase. In the US, renewable energy use increased by 40% during the first ten weeks of lockdown. Worldwide, all non-renewable energy usage decreased as industries shut down and people stayed at home, leading to an overall reduction in emissions of 8%. This has led to an expectation that increasing investment will be put into generating energy from renewable resources in coming years.

The International Energy Agency (IEA) estimates that 40% more renewable energy was generated and used during 2020 compared to the previous year and forecasts that this growth with continue throughout 2022. Overall, the cost of generating renewable energy from various sources, including onshore and offshore wind, solar and tidal, fell by between seven and 16%. This will be a huge help for countries and businesses trying to hit emissions targets, such as becoming carbon neutral or even carbon negative. Additionally, exciting new emerging energy sources such as biofuels, liquid hydrogen, and even nuclear fusion are becoming more viable, even if it may be a little after 2022 when their full impact of some of them will be felt. However, breakthroughs in all of these areas are likely to make headlines. Helion Energy – a pioneer in the field of fusion energy, which replicates the process used to create energy in the sun – expects their latest prototype fusion generator to come online during 2022. Practical applications are also expected to emerge in the field of “green hydrogen” energy. Unlike the established processes for creating energy from hydrogen, which involve using large amounts of “dirty” fossil fuel energy to create electrolysis, separating hydrogen and oxygen without emitting carbon, this involves using renewable energy, dampening the overall environmental impact.